Disclosure: I am participating in the Verizon Boomer Voices program and have been provided with a wireless device and six months of service in exchange for my honest opinions about the product.

Do you all remember the Verizon Boomer Voices Blogger Program that I am a part of? Well, as a part of the program we were given a FitBit One Wireless Activity Tracker to try out. I have written about it recently and I believe it is time for an update. If you missed the previous post you can read about it here.
The FitBit one has been my constant companion for a couple months now. It has encouraged me to be active, watch what I eat and get proper sleep. 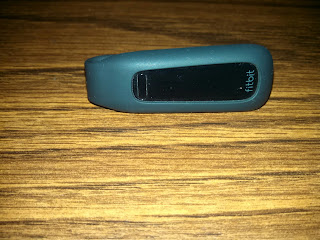 I believe the most important help the FitBit one has given me is encouragement. The FitBit lights up through out the day with little encouraging words. Such as I am ready Bonnie, High five Bonnie, and Smooches Bonnie.I think smooches is getting a little fresh with me but it sure does know how to press the right buttons. Yesterday along with its freshness it told me to Vámonos! Now, at first I thought how rude! I then checked Vámonos with Google and found it meant "Let's go" in Spanish. Ok, so it's not so rude but I still think it is a little fresh at times.
The FitBit has also made me a become competitive. My husband and I usually equally divide the mowing chores on our property. We have been sharing this chore ever since our riding more gave out on us. We do plan to get a new rider this spring but in the mean time the lawn is being mowed by a push mower. The FitBit has encouraged me to hog all the mowing chores ever since it recorded the 10,000 steps it took to mow half our lawn. One day I sort of took his half when he was called into work early. Ever since I am keeping up with the mowing when ever he is at work. I just have to get the 10,000 steps in twice a week. I think you will agree I need the exercise more since I sit long hours blogging.
Over this month I have lost another pound and a half. That makes a total loss of 7&1/2 pounds in two months. I am very excited about the weight loss.
What I have left to work out is how to use the sleep data that the FitBit is providing to correct my lack of sleep.
Over all I am extremely happy with this little companion.  Readers, What have you been doing to keep yourselves fit?