Disclosure: Grandma Bonnie's Closet has not been compensated for the following product review. I received a product sample for review purposes. All opinions expressed are my own.

Our new dog Scooby has settled in our home just as nice as can be. We have been spoiling him as much as possible. Given his background you can hardly blame us for wanting to pamper him just a bit. Well, he is still a little rough around the edges and we won't be leaving him alone with our grandchildren just yet. But I tell you he is turning in to a cuddly and lovable little guy.

With Halloween just around the corner I thought it would be fun to dress Scooby in a neat costume. I started looking online and found Anit Accessories. Anit Accessories is a Dog Costume Designer Company. They design dog costumes that are creative, cute, adorable and oh so fun. I had a hard time choosing just one costume to review. First I picked this adorable Giraffe costume. Unfortunately the costume was just a little small for Scooby. So we were given another shot at finding a costume that would fit perfectly. I looked over all the options again and it was not any easier to select a costume the second time around. I liked so many. If Scooby had been a girl it would have been even harder. They have the most adorable girl dog costumes. I just might have to dress Scooby in one of the cute Santa Baby costumes for Christmas if I can convince the hubby.
I was extremely excited when I heard that Tina from Anit Accessories decided to let me review two costumes for Scooby. That shows you just how exceptional this company really is. 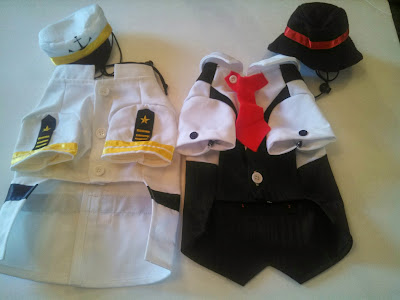 For my first selection I wanted to bring out the devilish but adorable side of Scooby. The Gangster Dog Costume fit the idea perfectly. 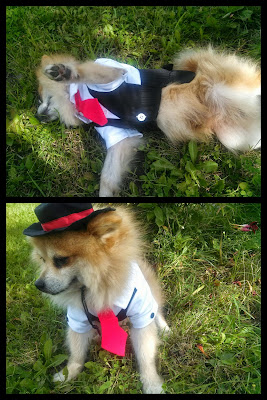 Scooby sure is ham in front of the camera.
A little information about the Gangster Costume: It comes with two pieces. It includes a black pinstriped vest with white sleeves, button on neck tie and a drawstring fedora hat. The costume has buttons for closures and not Velcro. I like the buttons much better than Velcro closures. Scooby has a Velcro closure on his fall coat. His fur actually gets caught in the Velcro no matter how careful I am about fastening it. With buttons his fur is totally safe. 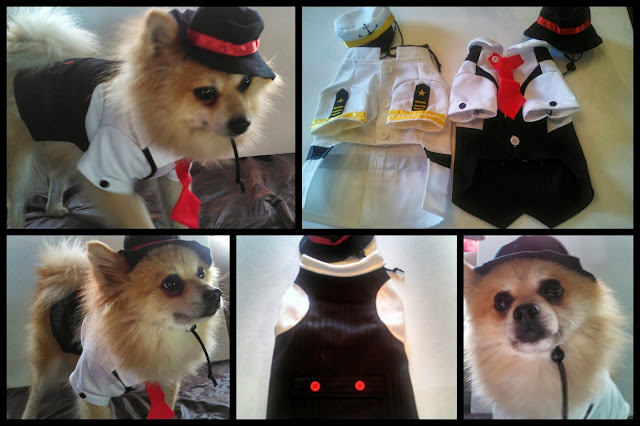 Next, choice I made was the Sea Captain Dog Costume. I thought it fit Scooby's personality perfectly. He loves to bark orders at the crew. He has become the Captain of our deck and bridge so to say. He keeps our cats toeing the line. If he thinks the cats get out of line he boots them off the deck. Although, funny but true! 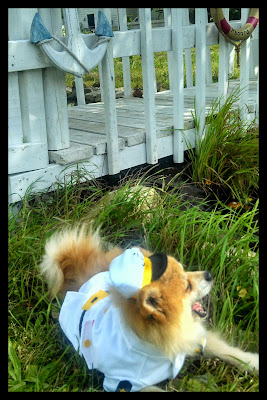 The Sea Captain Costume includes two pieces, a navy officers captains uniform and drawstring hat. The officers shirt has button down details and an officers insignia on the shoulders. 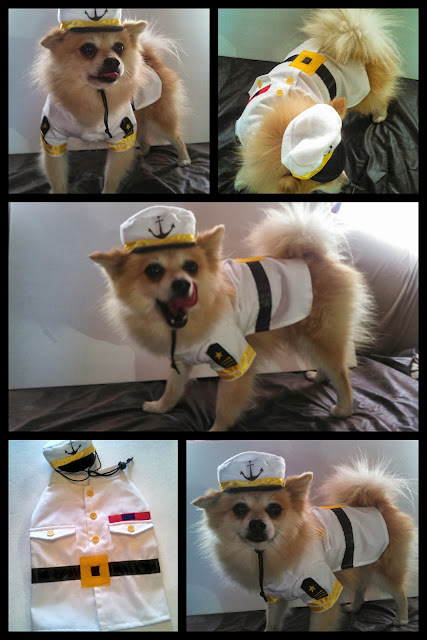 The details on both costumes are awesome. The fabrics are of high quality. I expect both costumes to last for years to come. I inspected the stitching and found it to be exceptional.  No corners were cut when making these beautiful costumes.
The costume sizes range from x-small to x-large. If you want an adorable and fun costume for the dog in your life a costume by Anit Accessories is the way to go.  I am sure you will find the perfect costume that will suit your pets personality. To find a store near you that sells these beautiful costumes check out this page..
Like Anit Accessories on Facebook.
Readers, What do you think? Which costume do you like most? What would you dress your pet as for Halloween?
Posted by Grandma Bonnie at 8:41 PM