Our new dog has been with us for just over two weeks. Scooby is getting along fairly well. If you missed his introduction you can find it here. Now, when we got him from the pound they suggested I get a male dog belly band to prevent spraying in the house. He was not neutered so they felt this would be a problem. We decided to make it not become a problem. On our way home from the pound we stopped and picked up two belly bands from the pet store.

I had never seen or heard of them before. They are just a simple diaper band with an absorbent middle and elastic around the edges. They have a hook and loop closure that makes it easy to put on and remove. They can be hand or machined washed but not dried in the dryer. 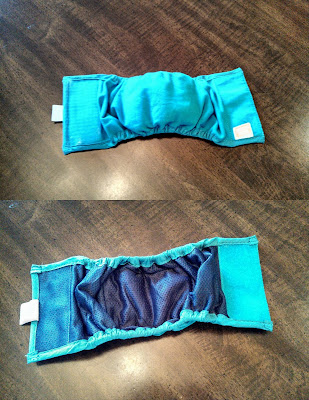 It started getting annoying not having enough belly bands. I was forever waiting for one to hang dry. I thought about going into town to buy a couple more. I really did not want to spend another $8 a piece for these simple diapers. Then it dawned on me I could make a couple from some of my sewing scraps. So my DIY was formed.
This is a DIY for a small Dog Belly Band
First you need to round up the following.
wicking fabric (I used an old tee shirt)
light airy fabric (cotton or flannel will do)
absorbent material (I used quilt batting)
PUL fabric (used for cloth diaper making)
hook and loop (Velcro)
2 peices 6" each of soft strech elastic (I used left over black PJ elastic)
thread of choice
news paper or tissue paper (any suitable paper for making a pattern)
Tape measure or yard stick
scissors
pins
sewing machine 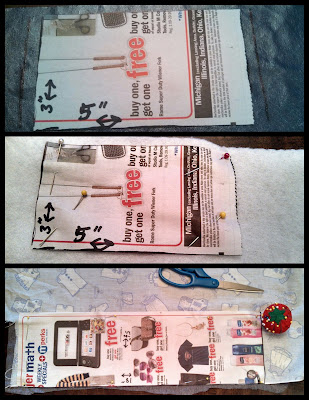 I placed the paper patterns on each fabric. The first is the PUL fabric. I did not pin this I traced around the pattern with a marker making it a little wider than the pattern. I traced this because I forgot to cut a 3&1/4" x 5&1/4." The reason I did not use pins is I did not want the water proof backing on the PUL to leak. PUL should be sewn or pinned the least amount possible.
The second it the batting. I pinned and cut two layers with the 3" x 5" rectangle. If your puppy/dog will use it as a diaper for potty training use three or four layers of batting..
The third is the two fabrics I selected. I pinned and cut one each. 18" X 5 &1/2." I will be using the print cotton fabric for the outside and the gray knit for the underside. 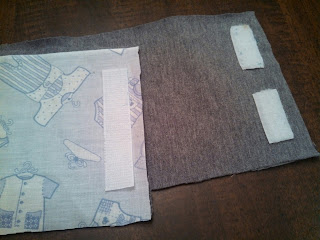 Next, I sewed  some scrap hook and loop (Velcro) to the rights sides (on one end of each) of the two pieces of fabric. At the end I added two more strips of hook and loop as I felt it needed to be a little more secure. Which you will see in the end photos.

Next, I placed the batting on top of the Pul fabric and ran a house hold glue stick around the edges. Then I folded the edges over neatly. The glue is just to hold the fabric and batting steady. The glue will wash out the first washing. I sewed the short sides on the edges once to hold the batting in place. Next time I might try using water proof permanent glue to hold the batting in place. I centered the padding on the wrong side of the gray knit fabric and sewed over the stitching at the ends. When I finished I realized I should have made a pocket to insert the PUL and batting. Then I would not have had to sew through the PUL making it lose its water proof seal.

Next frame is the pieces right side up. Flip the cotton piece wrong side up and pin the elastic strips on the center outside edges. Stretch the elastic tight as you sew it to the edges. Place the two fabrics right sides together with the loop at one end and the hook at the other. In the end this will help them line up for securing the diaper. Sew along three sides leaving one short end open for turning the diaper right side out.

The diaper is turned right side out. I then sewed carefully around the edges to help it lay neatly. Closing the open end at the same time.

Scooby has used this belly wrap a couple times now and it works just fine. It seems to be a little more comfortable than the store bought ones. They are made of a nylon fabric that is not as light and airy.
Well, I am off to make a couple more belly bands. I hope you enjoyed this tutorial. Some time in the future I hope to make a Dog Coat tutorial for the upcoming cold weather.
Posted by Grandma Bonnie at 10:34 PM