Our Weekend Comes To An End!

I was so happy to see Monday come around.  Although we had a fun weekend planned it turned out to be not so fun. Sometime on Friday I realized we had a pipe leaking in our laundry room. I shut off the valve to our water line and figured the hubby could fix it Saturday morning.
Early Saturday morning Hubby got all ready to go into the crawl space and find that pipe. Now, I have been under the crawl space a few time my self and it's not pretty or easy. I am standing in the laundry room so I can hear my hubby below. I hear lots of muttering and banging going on. As we both knew he had to remove the plastic overlay from the floor boards and release the water that was caught in in the plastic and insulation. We had two layers of insulation put under the house. (Saves a fortune on the heating bill.)
Then I hear hubby getting very frustrated. He found lots of water, wet insulation and no broken pipes. At this point I do not like what I am thinking. Not in the wall! Please not in the wall. I send up a few prayers.
Then my dearest returns muddy, wet and wanting a shower. I can't hardly blame him. He tells me we have to take the wall out behind the washer. We move the washer into the kitchen. Then I cringe as he takes out the wall. I want to praise my hubby for his neat work. He was careful to keep the opening as small and uniform as possible. Now, there were three pipes in that wall! Not one of those pipes looked bad. I could see where the pipes go into a hole in the floor wedged between to very large and thick beams. While my husband checked the pipes he had me turn on the water. The water sprayed out from the hole in the floor that was between the two beams. The pipe had a hole a little bigger than a pin hole
I could see fixing that leak was not going to be easy. The leak in the pipe is lined up right in the middle of the floor. Not below or above just in that three or four inch thickness. That hole did not have much room. My hubby could barely get one finger in there to see where the leak was.
We devised a plan of sorts. I stayed up top and wrapped the pipe with my two pointer fingers. I used red plumbing tape. Now, hubby was under the house again. He put a clamp on the pipe and slide it up on to the red tape. While he held the clamp with his one finger I screwed the clamp while almost standing on my head. You see screw drivers do not bend and there was no space in that hole to hold it sideways. I think that clamp had a mind of its own. Just slipping, sliding and turning every which way. I stood my ground though bloody fingers and all. It's fixed temporarily until we get in to town and buy some pipe. It all turned out OK and hubby got his hot shower.

I have got another story to tell that happened on Sunday. It's not quite as exciting as Saturday but it is worthy of its own merit.
Can you guess what's going on in the photo below? 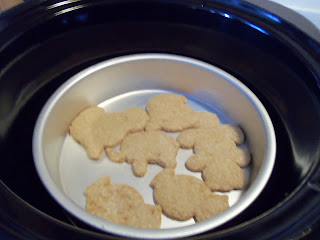 I am sure you know they are cookies but that is all I am going to say for now. I will share the rest of Sundays story next time. I hope you had a great weekend. Was it as exciting as ours was?
Posted by Grandma Bonnie at 9:36 PM