It has been a long scary week around here. I have learned a good lesson along with making a lot of work for my self. It all started with my need to add a waterfall to my Koi pond. I have been wanting to do this for some time. The biggest obstacle stopping me was that I did not have the proper rocks to create the look I wanted. I do have lots of limestone but that would cause the PH in the water to rise. When the water flows over the limestone it washes lime into the water causing bad water for the fish. My son came home a few weeks ago with a small pile of large sandstone rocks. He mentioned I could use it for the waterfall if I was interested.
So, this week I finally made the time and set out to create a small but nice little waterfall. I purchased a small pond pump and hose. Then proceeded to hook them up to the water fall box that I purchased last year on sale.  At that point I wish I had taken pictures. I had thought about pictures but I wanted the waterfall to run a few days and hoped the filter would clear up the algae and make it a little clearer for some nice pictures. That was lesson one. Take pictures when you think about it do not wait!
So my cute little waterfall was up and running. Next morning I go out to feed the Koi and Goldfish. The fish normally see me approaching the pond and swim right over to be fed. Hm, no fish! I tossed in a handful of pellets surely they would all come up for food. Just a couple poked up their heads grabbed a bite and disappeared. I began to think. The temperatures did drop last night. They would come up later when the surface warmed up a bit. Later in the day it was pouring rain so I did not see any fish. That is normal with hard rain.
Next day I did not see them in the morning but was terribly busy with my grandson. I thought about the fish but had to put my thoughts on a back burner and play with my grandson. I did mention the fish to my oldest son when he picked up Little Bug. I even started to wonder if we had a crane in the area eating the fish.
Some time very early the next morning my son called to tell me he thought the sandstone was poisoning the water. Oh, how terrible I felt. How could I have not thought about that myself. I should have researched about sandstone and fish ponds. I was out at the pond about 6 am draining the water as fast as that little pump would allow. I managed to drag the heavy stones about a yard away from the pond. Where they could wait for my son to finish moving them. I did not want the rain to wash more poison into the water. I drained about 1000 gallons of water from the pond. Leaving around 300 gallons of green water. I finished refilling the pond around 10:30 pm. The story does end well for my beautiful fish. No fish were found dead. For that I am thankful.
I just had to share some pictures from today when they all came out to eat. 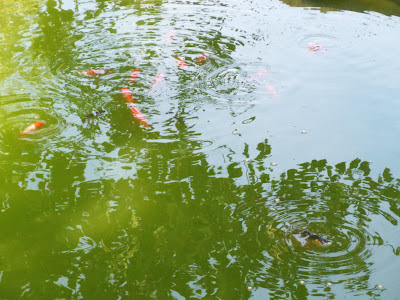 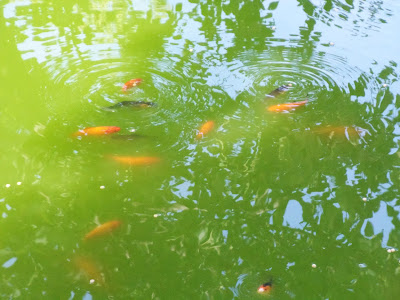 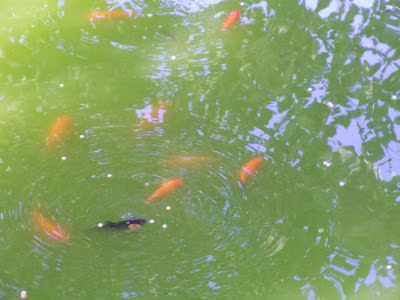 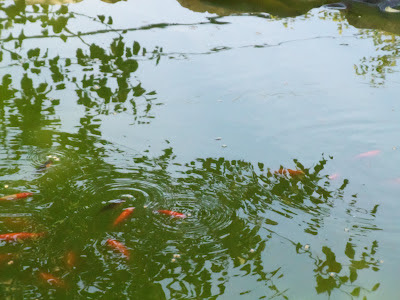 What are you most thankful for today? I hope you all enjoy your day!
Posted by Grandma Bonnie at 9:27 PM